Sun Lakes Community Theater fall performance is “Trouble at the Tropicabana”. Lucy, Ricky, Ethel and Fred debuted at the Oakwood Country Club in Sun Lakes with several performances that will continue October 24th and 25th in the Arizona Room at the Sun Lakes Country Club. 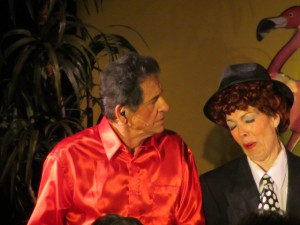 Trouble at the Tropicabana is one of several performances the Sun Lakes Community Theater presents.

Directed by Sandy Pallett, this show like most performances sell out quickly. The next performance “Murder at the Howard Johnson’s” will kick off November 19 and run through the 23rd at the San Tan Ballroom at Cottonwood Country Club. Call 480-382-6290 for more information or to reserve tickets.

SLCT became an official club in 1988 with a $500 donation from EJ Robson, the developer of Sun Lakes Arizona. They produce three major plays each year to a combined audience of about 2,000 people. Performances include dinner options and a cash bar is available. All cast is volunteer and anyone with an interest in drama or theater can be involved. SLCT is looking for people who are interested at all levels from set up, marketing, donations to actors and actresses. Contact the Sun Lakes Community Theater here.

Whether it’s a comedy like Lucy and Ricky or a murder mystery you are sure to be entertained by this fun group of volunteers performing in the active adult community of Sun Lakes Arizona.