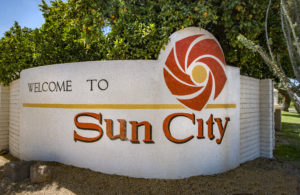 Sun City AZ real estate is in high demand! This 55+ active adult community in Arizona, developed by Del Webb. He started Sun City Arizona in 1960 and it now has over 26,000 homes, 11 golf courses and many amenities and social clubs. Sun City is known for its home values, low property taxes and affordable homeowner fees.

On New Year’s Day 1960 Del Webb’s Sun City Arizona opened their doors to the public that led to 100,000 visitors who toured the property in the first weekend. Del Webb went on to sell 400 homes in the first month and 2,000 in the first year making it one of the most popular active adult communities in Arizona. Between 1960 and 1978, Del Webb continued to build a community that catered to the retirement dreams of thousands of Americans. This active adult community is now home to 40,000 full and part-time residents.

Dell Webb has developed many other 55+ communities across the Valley, but Sun City is the first and largest.

Sun City Arizona is situated 16 miles northwest of downtown Phoenix. While originally constructed in the middle of the desert, the explosive growth in the West Valley Sun City is now surrounded 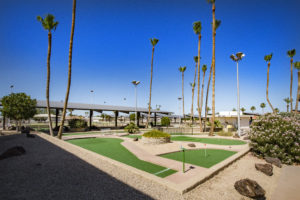 by shopping, medical facilities, restaurants and many cultural attractions. Within a short distance, you will find the Arrowhead Mall, Challenger Space Center, West Valley Art Museum, Wildlife World Zoo, ASU-West, and Lake Pleasant. And, if you love sports, you  will enjoy the proximity to sporting venues hosting local teams such as the Cardinals (NFL), Coyotes (NHL) and several Major League Baseball spring training camps.